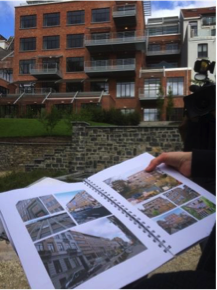 Day 2 of our program was kindly supported by CERAA, an agency which is tasked with hosting international delegations like ours to Brussels (they host on average one delegation per week – think about the positive branding which that generates for a region!). The objective was to visit five projects that have been retrofitted to the Passive House standard, both commercial and residential.

The first project we visited was an apartment complex located in the former Red Cross facility in Brussels city center. The Architect that hosted that visit told us with great pride that she had to calculated over 100 thermal bridges for the project, for which she gained a huge high-five from Tomás O’Leary.

Followed the above we visited an office retrofit on Rue de la Loi, also in Brussels city center. The front facades of both this and the Red Cross building had to be insulated internally in order to preserve their exterior character.

The next project that we visited on our retrofit tour was ‘Philanthropy House’ a 1980’s office building in a high profile location in Brussels. Architects Greenarch showed us how they dramatically reduced the heating and cooling demand of the building through insulation, thermal bridge detailing and airtightness the use of retractable blinds.

Following that we visited two large industrial buildings located on the Brussels Canal, formerly used as a major brewery (don’t worry, there’s still 1,000’s of different types of beers to enjoy if that’s your thing...). Both buildings have been converted to hotels, one of them a training hotel for students, the other a budget hotel which was absolutely thronged with teenagers when we arrived, energized by the high oxygen low carbon dioxide interior environment (aka ‘party central’).

The latter project (Meininger Hotel) was refurbished by renowned Brussels Architect Sébastian Moreno- Vacca (A2M Architects – awesome!) who gave our group a fascinating impromptu lesson in the hotel lobby on waterproofing historical brick facades to reduce moisture ingress from the exterior without compromising vapor transport from the interior. Sébastian had us in the palm of his hand as he sketched various treatment options and their comparative performance. Later than night we had the pleasure of listening to Sébastian again as part of a wonderful evening reception hosted by Praxis. He joked that building Passive House projects was reducing his fee income because he constantly delivers Passive House projects for less than the cost of conventional construction. We were treated to a showcase of diverse Passive House projects that were all built at incredibly competitive rates and without compromise in terms of architectural quality or interior finishes. “Just do it” he encouraged – “Passive House is nothing special, it’s easy”. 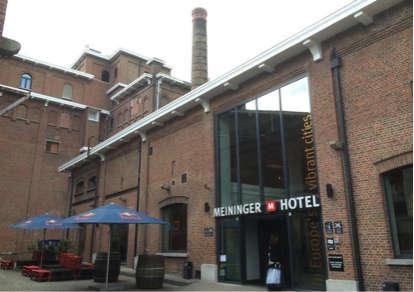 We left the reception that night exhausted and exhilarated at the same time, having experienced at first hand a wonderful collection of retrofitted Passive House projects that prove pretty much that anything is possible. Tomorrow would provide a rich contrast, focusing on new-build on-site construction projects.