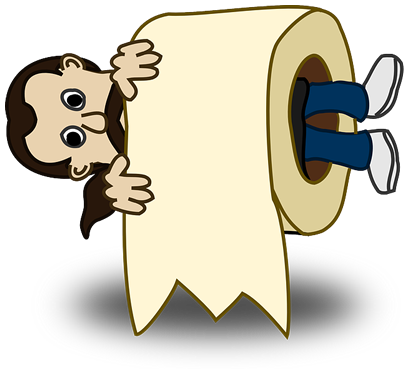 Living in the countryside as we do, we’re 1 of 440,000 proud owners in Ireland of a DWWTS. A wha..? That’s a domestic wastewater treatment system, or more commonly known as a septic tank.
We’ve just had to have ours, emmm…, “emptied” is the best way of putting it. Whilst the liquids drain off from the septic tank into our percolation area, the solids (AKA poo and toilet paper…) gradually build up in the tank and at some point have to be ‘flushed away’ somewhere.

My wife and kids hate me talking about this. In their world, human waste is magically whisked away in hermitically sealed lavender scented potpourri bags and conveniently evaporates into thin air.
If only.
The emptying process is simple. Phone the sewage-sucker man (complete with tractor, orange tank and green pipe). Lift the lid (the nice man will do this for you), put the business end of the pipe in your tank of unmentionables and press the ‘suck’ button on the tractor (note: do not press the ‘blow’ button). All over in a jiffy, hand over €300 and sleep in the comfort of knowing that you won’t have to go through that again for another 18 months. Colonic irrigation on a gargantuan scale.
But where does the nice man go with the stuff? This is where it gets interesting.
He has to drive his tank of terror to the nearest municipal waste water treatment plant where our virtual ‘toilet’ is flushed into an even larger community facility. At this location we, the taxpayers, spend millions of hard earned cash on energy to ‘clean’ our poo after which it is taken out and spread on farmland (all in accordance with very strict regulations). I’ve seen this done – the black sludge smells curiously like washing power.
In our case, the waste travels approximately 35km to the Council facility. Assuming that 66% of the nation’s DWWTS should be emptied each year and brought similar distances; that totals a journey of some 10 million km in a tiny country like Ireland. That’s three times the distance to the moon, or 25 times the circumference of the earth.
Makes me constipated just thinking about it.
One of the biggest energy costs for local municipalities is, you’ve guessed it, waste water treatment. Getting rid of human waste is therefore a massive energy costs for society. But as the exasperated William McDonough tells us, we’re using all that precious energy to effectively destroy what was once solar energy (all food, even meat and fish, is derived from energy from the sun – think about it).
We use energy to destroy solar energy. Clever, eh?
There are innovative examples of where this irony is being put right, however, such as in Denmark where the local facility generates excess energy from the treatment process. That’s progress. But in Ireland we still have the small matter of the 10 million km travel distances to sort out. That’s a whole other matter.
We also need to re-think the traditional (archaic) septic tank (we are stuck in the flush-fill-suck cycle) and think outside of the box. Let’s reconvert the once-solar energy back into something useful.
Check out Olan Herr in Dundalk – he’s got some clever ideas on innovative ways to treat our unwanted solar-energy material. 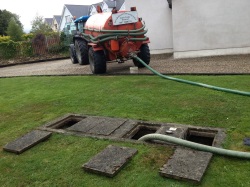